A Space for Mobile Filmmaking Storytellers If you're a filmmaker…

What is “Mobile Film Stories”? S. Botello Productions™ is pleased…

SBP Podcast Mobile Filmmaking is The Voice Of Mobile Film™ launched in October 2017 worldwide. Hosted by Susy Botello, this…

San Diego, California - Launched in 2009: All films shot with smartphones. Submissions are now open for IMFF 2021. There…

Stream Your Films - Join Us

Are you making films with your smartphone camera?

MobileFilmStories.com is a video streaming distribution community for mobile filmmakers who use their smartphone cameras to shoot their films. Launched September 8, 2020: Read the press release.

“Wow this is a game changer for those in the mobile film making community. Making a film is only half the battle. Getting it seen is even harder sometimes. This is brilliant news.” Jed Brophy, September 8, 2020 www.jedbrophy.nz

Cucumber (Vasya) arrives in St Petersburg in search of his brother, Alec. Picked up by Alec’s girl, Alla, he is carted around the city, encountering different characters, on a day that will affect all their lives. 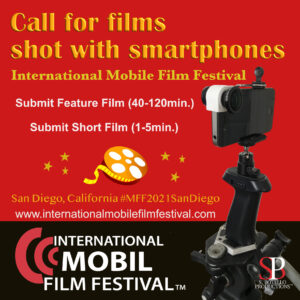